skip to main | skip to sidebar

We checked out of our hotel and wended our way to Rome's airport, where we checked the car and caught the shuttle to our last hotel, after schlepping our bags forever.  Very bad planning.  We grabbed some pizza for lunch and then headed over to Ostia Antica, an excavated Roman town that I found fascinating.  It had been the main town of commerce in southern Italy during the height of the Roman empire.  Founded in the IVth century B.C., it was located near the mouth of the Tiber whose silt eventually buried the town, which had been abandoned in the 9th and 10th centuries AD.  The excavations started in the 19th century, but were completed in the 20th.
In Ostia Antica, you can walk the 2km road where its inhabitants walked; you can marvel at the mosaics, the baths, the theater, and the temples.  You can really get a feel for what it was like to live there, although the roofs are no longer present, having been burned and/or buried.  I highly recommend a visit to this ruins; try to stay for the entire day.

Before the battery of my camera died, I got a couple of photos:

And that's our Foodie Trip.  I hope you can join us next time, in October 2012.  Write joan@tuscanyartsvacation.com for details.

Posted by Joan at 1:48 PM No comments: Links to this post

The trip to Castelluccio.

After our cooking class and its wonderful staged lunch, we took off for Castelluccio in the mountainous eastern section of Norcia.  Castelluccio is famous for its lentils, which are grown on the Castelluccio plain.  This plain is also famous for its display of wild flowers in June and July.  Photographers come from far and wide to capture their vivid colors.

I bought some lentils and piselli or wild peas in the very small town.

Then we hustled back to Norcia to don our party dresses for the Gala Dinner at the hotel where we partook more of Flavio's wonderful creations.  Unfortunately, I don't have photos.  My camera's battery was dying.


Posted by Joan at 1:36 PM No comments: Links to this post

Our cooking class in Norcia.

Early in the morning we went to the market held in Norcia.  I was looking for another bag to put all my new extra stuff in, but didn't find one there that I liked.  I finally found one in a small store that sold all sorts of things, like socks and duffle bags, a small department store, to which I later referred some nuns who needed new stockings.

Unfortunately, I don't have any photos of the market; I was on the mad hunt for that bag.

Around 10 am, we joined Flavio for our Norcia cooking class in what used to be, many years ago, the barn. 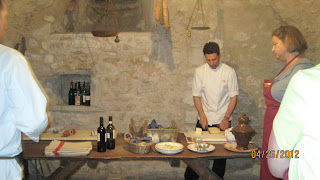 We made all sorts of goodies:  lentil soup, risotto,  pasta, and tomato sauce.

What a delicious lunch this was.